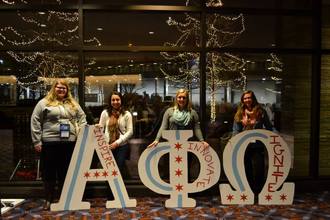 The following traditions are very important aspects of making Zeta Beta such a unique chapter. Please read and enjoy the things brothers have done in the past and continue to do today!

(Ordered Alphabetically)
*currently a tradition in 2014


APOTIMS*
APOTIMS is the name given to the Alumni Newsletter sent out to all alumni of the Zeta Beta Chapter. APOTIMS stands for Alpha Phi Omega That I May Serve, the fraternity name along with the Virginia Tech motto: Ut Prosim (That I May Serve). The newsletter informs alumni about Chapter events and provides correspondence between alumni and the active Brotherhood. The Alumni Secretary is responsible for putting together APOTIMS each semester.

Brother Interviews*
One of the requirements for Pledges to complete is a one-on-one interview with each Active Brother. Brothers spend at most a half-hour with each pledge sharing information about themselves and filling out pages in the pledge book. Interviewing is a great way for the Brotherhood and Pledges to get to know each other.

CAPS*
This is the Chapter Assessment and Planning Session, which is a mandatory session for the fraternity to attend at the end of each semester.  It’s “a tool to help the chapter identify its goals and begin to plan its program for the coming year, based on an assessment of the past year”.

Composites*
It is the duty of the Historian to schedule a composite of our Chapter during each spring semester. A composite, which has individual pictures of each Brother and Advisor, is given to the President and all of the Active Brothers receive smaller copies of the Composite if they want one. A large copy of the composite is displayed at the Spring Banquet.

Family Tree*
The family tree is an important Zeta Beta tradition. Each brother is linked to all others through the families in our  Chapter. The family tree helps us to remember we are all  related through one common goal of service. Each active Brother adds their names and those of family members who are no longer at Virginia Tech in all of the pledge books. This tradition keeps the unity of Zeta Beta alive in all of us. It also helps us remember the alumni that have kept ZB going before we ever came to Virginia Tech.

Initial Interviews*
Prospective members of ZB’s chapter of Alpha Phi Omega must first be interviewed by a group of Brothers at Initial Interviews.  The prospectives go through a total of four rooms: The Leadership, Friendship, Service, and Pledgemaster Rooms. These interviews help Brothers learn more about the prospective members before offering Bids. This process also helps pair Big Brothers with future Little Brothers.

Initiation*
After the completion of the pledging period and Neophyte week, Pledges are initiated in a formal ceremony (often held in Hillcrest Hall and War Memorial Chapel). In the past, it has been a tradition for families to take their Little Brothers to a late-night eatery around Blacksburg following initiation.

Joint Brothers Meetings*
These are special meetings that occur on the Mondays immediately following Ritual and Initiation. They are mandatory for every Active and Associate Brother, as well as for Pledges. Content of the meetings are similar to regularly scheduled meetings, however the purpose is to have set times for the entire Brotherhood to gather as one unit.

Membership Status*
There are three levels of membership status as used by Zeta Beta. Each Brother may choose his own status at the beginning of the semester, before the third Brothers’ meeting. First, Active Brothers must attend all meetings, complete 45 hours of service each semester and pay their dues. Second, Associate Brothers must only complete 10 hours of service, attend a few selected meetings and pay their dues. Finally, Leave of Absence brothers have no rights or responsibilities in Zeta Beta. They do no have to attend any meetings, pay dues or record any service hours because they are typically away from school to study abroad, etc.

Mid-Quarters*
Mid-quarters is an evaluation that takes place halfway through the pledging process. Pledges must complete a certain amount of their requirements and answer questions related to the Fraternity and it’s history for 5 minutes in front of the entire Brotherhood. Active Brothers are required to attend.

Organizational Fair (Gobblerfest*)
Each fall semester at Virginia Tech, organizations can advertise their activities or membership at the Organizational Fair in Squires, now called Gobblerfest. There is always a huge turn out of students, primarily freshmen seeking new ways to get involved in college. Brothers may sign up to help support our display and invite prospective members to come out and rush APO.

Pass the Gavel*
Pass the Gavel takes place at the very last Brother’s meeting of each semester and is a time for brothers and graduating seniors to say kind words and a special good-bye to each other in front of the entire brotherhood. It is also a time to reflect on the fond memories of Alpha Phi Omega and to also wish everyone the best of luck. The President’s gavel is passed through the room to each participating member. The Brother says what they want, strikes the gavel, and passes it onto the next Brother. This is traditionally a very emotional event for most Brothers.

Penny Wars ("Piggies"*)
Every semester Zeta Beta holds Penny Wars to raise money for the Fraternity or another service project chosen by the Historian. The competition is to see which pledge class can get the most points by donating money the “Piggies”. There is one piggy for each of the four most recent pledge classes and a fifth piggy that represents all older pledge classes called the “Old Fogies.” Piggies are brought to each Brothers meeting pennies and bills are donated for positive points toward a pledge class and silver change is negative points.

Plaquemaking & Neophyte Week*
Once Pledges have completed Final Vote-In and all their requirements have been met, they begin Neophyte Week, or the week before Initiation and becoming officially Brothers. During this week, Pledges, now called Neophytes, must dress up when on-campus and carry plaques. In the past some Pledges have also carried candy to give to Brothers for signing their plaques. Plaques have the Fraternity pin on the front.

Pledge Books and Pins*
Pledges wear pins during the pledge process and carry pledge books which are signed by the Brotherhood. The books have the pledge name’s on the cover, the Fraternity crest, and the Virginia Tech seal on them. The letters: Alpha, Phi, Omega, Zeta, and Beta also appear on the outside of the books. These items help identify pledges while on campus and make interviewing a part of a pledge’s everyday activities.

Pledge Class Scrapbook*
Each pledge class elects officers for their pledging semester. One of the offices held is Historian. The pledge class Historian’s main duty is to put together a scrapbook. Each pledge traditionally gets their own page in the book, along with the Pledgemaster and pledgemaster’s assistants (PMA’s).

Ritual*
ZB’s Ritual Ceremony is a Pledge Brother’s first official ceremony in Alpha Phi Omega. It is during this time that prospectives become official Pledges and meet their APO families. Ritual has taken place in both Hillcrest Hall and War Memorial Chapel in recent years.

Robert's Rules*
Roberts Rules are a way of maintaining the order and composure of the meeting even when the subject matters at hand are at their most controversial. Through the proper application of Roberts Rules, motions can be presented, discussion can be conducted in an orderly manner, and the voice of every member of the chapter can be heard in the most effective way possible. Robert’s Rules are used during events such as elections, MQs, FVI, and any type of voting.

Good, Bad, and the Ugly*
The Good, Bad, and the Ugly was created to give feedback to the Executive Board regarding any and all issues within the Fraternity. All Brothers may anonymously make comments “good, bad, or ugly” by submitting comments online at our website: www.zbofapo.org or previously in a box during certain Brothers meetings. It is encouraged that all comments be constructive, so that resolutions may be made to fix the problem.

Toilet Seats*
The Executive board of Zeta Beta receive Toilet Seats with their office’s name on the front. They keep these toilet seats until the end of their terms. The seats are received during the Induction of Officers at the spring Banquet. On the back of the seats, the past officers leave comments and messages to the new officers.

Senior Slate*
Senior Slate is the chance for graduating seniors to take an active part in elections for the upcoming Executive Board. At a private meeting before nominations are opened to the entire Brotherhood, seniors choosing to participate will debate and decide who their ideal Executive Board would be. The information from this meeting will remain closed to all members not in attendance. Their decision will be announced prior to the opening of nominations, where the nominated Brother must accept.

Shout outs*
This tradition started in 2012 by chapter President Russell Dowell. Shout outs open up the opportunity at the beginning of each weekly meeting for brothers to recognize another brother for a kind or extraordinary action they made in the previous week. It is a great way to start meetings off on an appreciative, happy note.