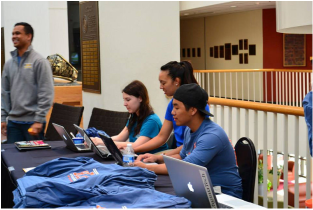 On March 2, 1968, Zeta Beta hosted the Section 22 Conference. Chair of the event was Pete Dunavant.  Zeta Beta was the largest delegation present at the Fall 1969 Sectional Conference, hosted by Mu Iota at Lynchburg College.

In 1972 Zeta Beta hosted the chapters of Section 82.  Named in memory of Prof. Blair, the conference gave the delegates of the various chapters an opportunity to meet and discuss chapter activities.  The group was honored with a luncheon keynote speech delivered by Alpha Phi Omega National President LTC Lucius Young.  Region III Representative to the National Board, Lorin A. Jurvis, presented a certificate of appreciation to National Board Member Dr. James W. Dean for his outstanding services to the fraternity over the years.

At the 1976 Sectional Conference held at Virginia Tech, Lynn Novikoff was elected to the office of Sectional Secretary for 1976-1977. In the spring of 1978, ZB took over the responsibility of hosting the conference because of lack of interest of other sectional chapters.

In March of 1982, Zeta Beta hosted the annual Section 82 Conference, which was attended by six chapters.  The Conference included a Sectional Service Project (cleaning at the Christiansburg Community Center).  Zeta Beta was also involved in the 1983 Sectional Conference held at the University of Virginia.

On March 30th, 1996, the brothers of Section 82, which consisted of the entire Commonwealth of Virginia, decided to split into two sections, 81 and 83.  On August 1, 1996, Section 81 was founded.  It serves the colleges and universities of Western Virginia.  ZB brothers on the Section Split Committee included Jeff Dodson, Shawn Murphy, Jamie Conover, John Conover, Judy Thompson, and Michael Leahy.

In spring 1997, Zeta Beta hosted the first annual Section 81 Conference.  The theme for the conference was "Doing Service 'til the Cows Come Home."  The Sectionals Chair was Shawn Murphy.  Thirteen chapters were represented, including all 6 in our section, for a total of 132 brothers.  A Section Distinguished Service Key was awarded to Jamie Conover, and she was reelected to serve as Section Chair for the coming year.

The sectional conference of 2002 was held at Emory and Henry.

In 2003, the sectional conference was hosted by Zeta Beta.

The 2010 sectional conference was held by Radford University and had a dinner mystery theme with August Saroll and Claire Eberhardt attending.

2012: Michelle Colandro and Russell Dowell attended this sectionals conference themed "In case Nostradamus was right the Brothers will still unite!" in Roanoke. Zeta Beta received the following awards at the 2012 Sectional Conference: Most Service Hours for NSW in Section, Most Pledges in Attendance at Sectionals, and the Joe Scanlon Membership Award.

2014: Hosted by Zeta Beta at Virginia Tech on March 21, 2014 through March 23, 2014.  The theme was "Olympics". Voting delegates were Zargham Ghani and Jasmin Thomas.  The reception was held in Lane Stadium.  Zeta Beta received the Joe Scanlon Membership award.
Powered by