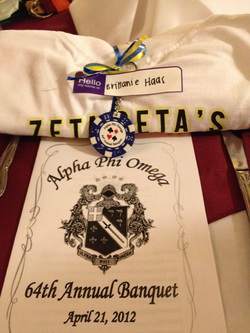 Following the tradition of the installation banquet in 1948, Zeta Beta has continued to hold annual and semi-annual banquets during the years.  Brothers and alumni gather each year to celebrate the initiation of the new brothers, the accomplishments of the school year, and the continued success of Alpha Phi Omega on the Virginia Tech campus.